You are here: Home / The Course / Bunker Renovation Works

In 2017 we commissioned Howard Swan, Golf Course Architect, to carry out a review of the bunkering on the golf course and to make recommendations. Howard Swan’s report was considered by the Council and discussed at a Special General Meeting in October 2017. Members supported embarking on a programme of redevelopment specifically in relation to the bunkers. A copy is available to view in the Clubhouse. Last winter we completed phase 1, redeveloping the 13th and 14th holes. This work has been well received by members and visitors.

At the 2018 AGM members approved a proposal to continue the programme and redevelop the bunkering at the 12th hole during winter 2018.

The works for the 12th hole are shown on the drawing contained within Howard Swan’s report.

This involved removal of the bunker on the left between the 14th and 12th greens and the two bunkers at the back of the green (in addition the right middle bunker, replaced with a swale). The other bunkers were reshaped with additional drainage and new sand similar to that provided in the 13th and 14th  hole bunkers.

Work carried out in November and December 2018:

Majority of the work was carried out before Christmas. After leaving the base layer to settle (January / February) the bunkers are now completed – filled with sand, compressed down and topped up. They are now finished. As a result the 12th hole is now fully reopened with all bunkers and new turf now in play.

To make sure we look after these areas, an area at the back of each bunker has been marked with arrows (see picture below) where we would like members and visitors to enter and exit the bunkers – this will create as little disruption to the new bankings and turfed areas as possible.

Please rake the bunkers after you have played, with 2 hands to redistribute the sand evenly.

Don’t forget the sand will feel different to other bunkers on the course, so it might take you some time to get used to them. 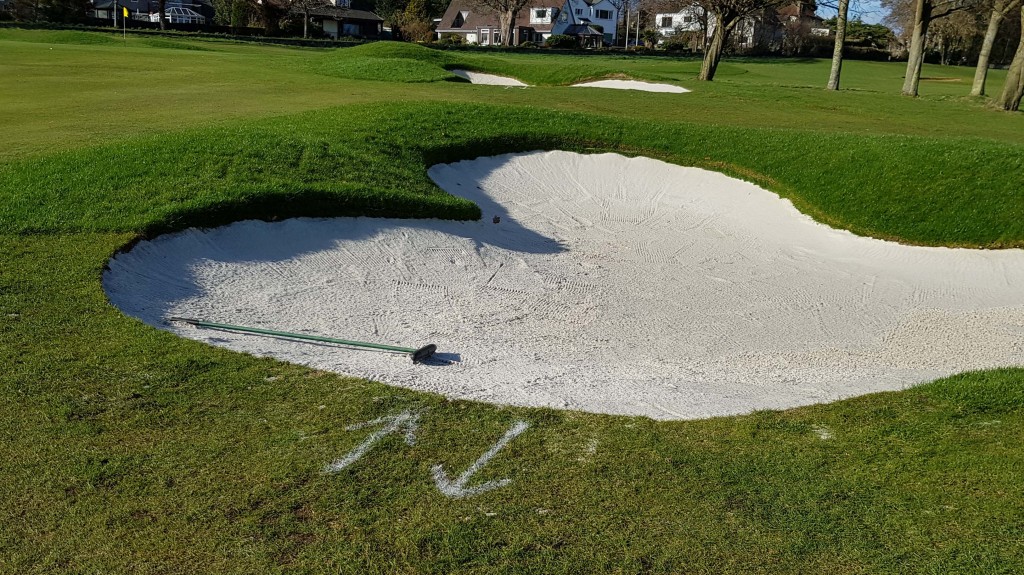