You are here: Home / The Course / Course Guide 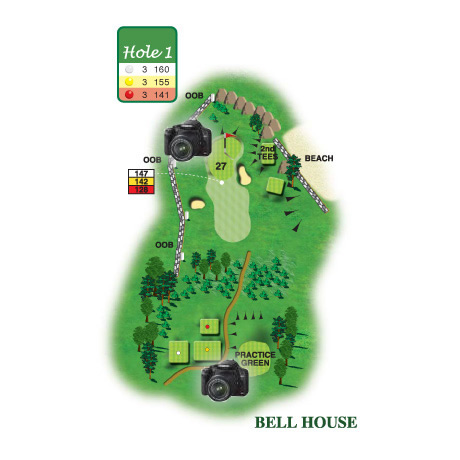 The first hole is probably the most stunning view in golf; I certainly haven’t seen anywhere more spectacular. The flagpole is the best way to judge the wind direction but the prevailing wind is into from the right. If playing a normal flighted shot then the brave line is at the bunker to the right of the green and let the wind bring it back. An alternative is to play a running shot landing short right and letting the natural contours take the ball down onto the green. The perfect type of shot is to play a punch; take one or two clubs more, hold down the grip, position the ball further bank in the stance and play a 3/4 backswing and follow through. 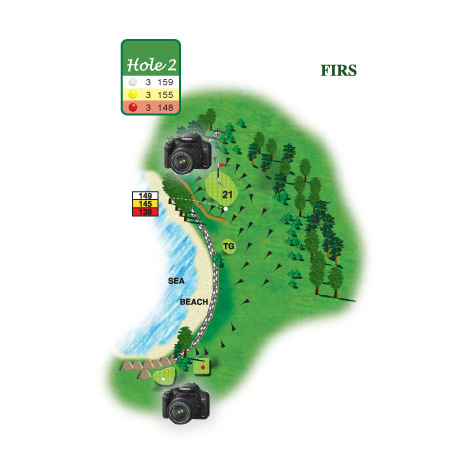 The second hole is a similar distance to the first, but generally straight into the wind. I would recommend 1 to 2 clubs more than you played at the first. If you miss the green try and miss it to the right as down to the left is an extremely difficult chip up the slope. The perfect shot again is a punch shot. 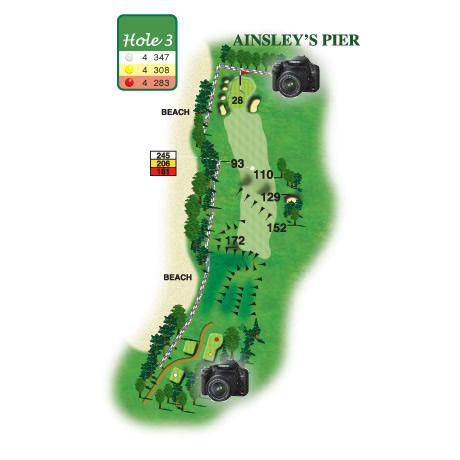 The fourth hole is a short par 4, but with an extremely difficult green. For the longer hitters a fairway wood or long iron is the ideal club for position. Aim to the left side of the fairway as all shots kick down to the right off the hill. The second shot is generally a very short shot but control is vital as you must leave the ball below the hole to give you any chance of holing out. 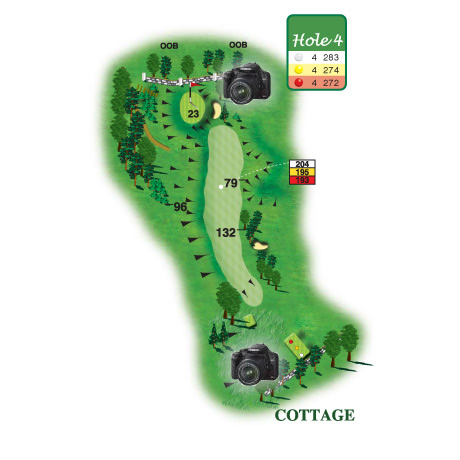 The fourth hole is a short par 4, but with an extremely difficult green. For the longer hitters a fairway wood or long iron is the ideal club for position. Aim to the left side of the fairway as all shots kick down to the right off the hill. The second shot is generally a very short shot but control is vital as you must leave the ball below the hole to give you any chance of holing out.

The fifth hole, previously the eleventh up until 2020, is a fairly straight forward par 4. The key here is to get a good drive away, avoiding the trees on the right and land on the right centre of the fairway. This will leave a fairly short shot into the green and hopefully a good birdie opportunity. 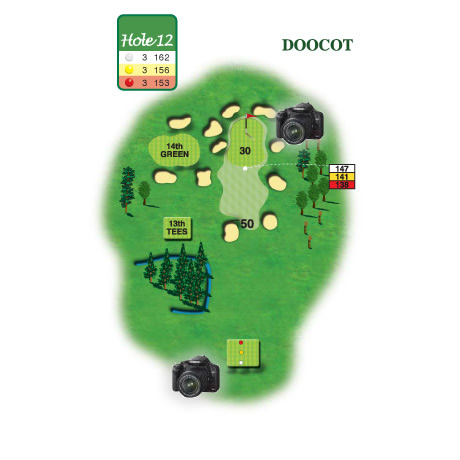 The sixth hole (previously twelfth up until 2020) is a very testing par 3. It is an uphill shot and the wind is generally into and from the left. Take at least one more club than you would take normally for this distance and aim to the left centre of the green. 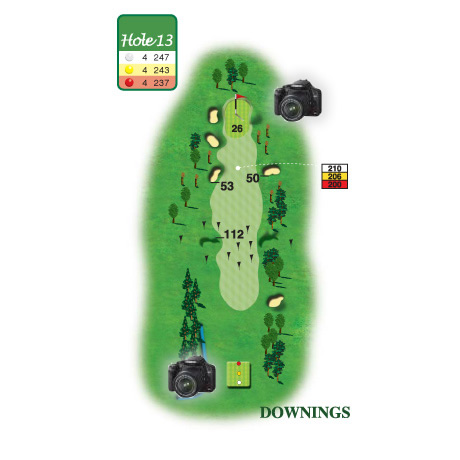 The seventh hole (previously the thirteenth up until 2020), is a definite birdie chance. For the longer hitters the green is on but be careful as there are bunkers left and right of the fairway. A good solid straight hit will set you up for a short chip into the green, or hopefully a short putt. 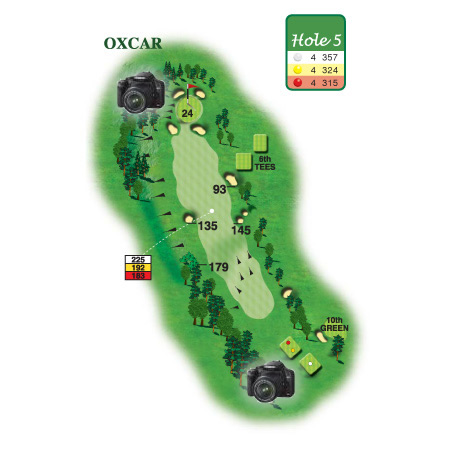 The eighth hole (previously the fifth up until 2020) is a fairly straight forward par 4. Good position off the tee will leave you a fairly short shot into a very tight opening at the front of the green. The further left you can keep your tee shot the more the green will open up. If you do leak your drive to the right please shout 4 as the tenth fairway runs up the hill. 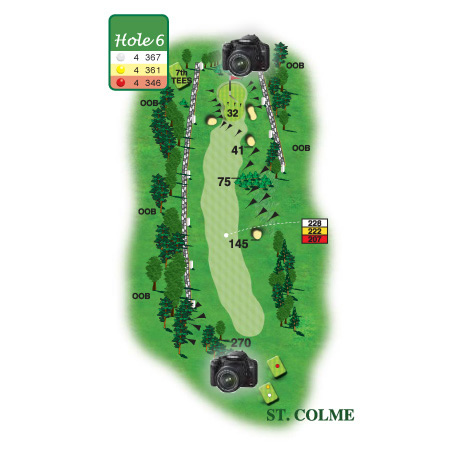 The ninth hole (previously the sixth up until 2020) is a challenging par 4. A good drive is essential to give you a view into this difficult green. The left side of the fairway is the perfect line as it enables you to see the full green. The second shot is into an elevated, two tier green which slopes from back to front. You must try and leave your shot below the hole to have any chance of holing out. If it is a front pin position and your ball finishes above the hole then there is a high possibility of you putting off the green, so be very careful. 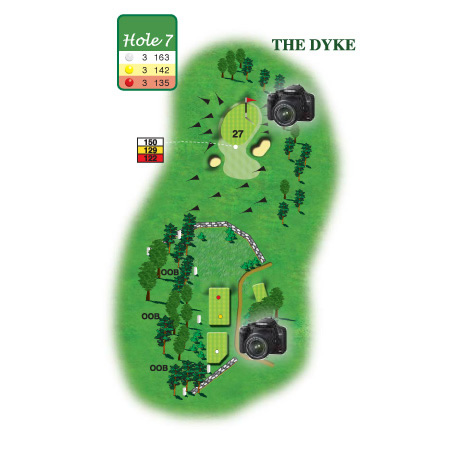 The tenth hole (previousl the seventh up until 2020) is a very testing par three. The prevailing wind is across from the right. Try and aim to the right of the bunker on the right, or even further right if the wind is extreme. You do not want to go left as you could end up on the eighth fairway. To combat the wind movement try and knock the shot down like you did at the first. 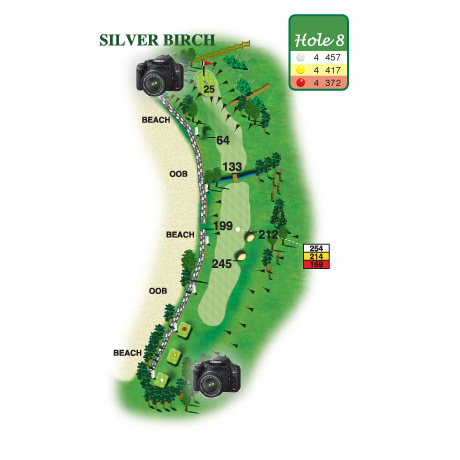 The eleventh hole (previously the eighth up until 2020) is undoubtedly the hardest hole on the course. From the medal tee and for the majority of players it should be treated as a par 5, although a par 4. The fairway slopes from right to left so try and hit to the right side of the fairway, but be careful of the bunkers on the right. The second shot will be a long one, the perfect line is to land the ball short front right and let it run onto the green. It is very difficult to stop the ball on this green with a long iron or fairway wood. A four is a bonus, almost like a birdie as it generally plays into the wind. 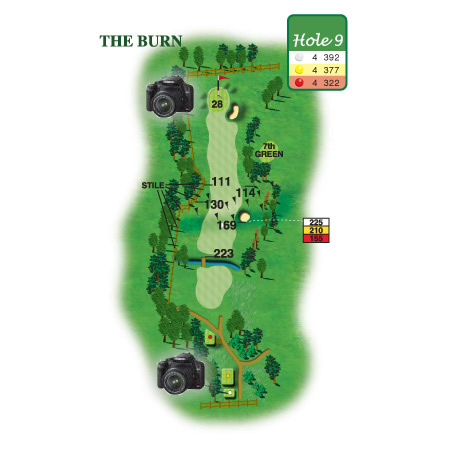 The twelfth hole (previously the ninth up until 2020) is another very testing par 4. The first challenge is to clear the burn and miss the bunker on the right. The ideal line is right centre of the fairway. A blind second shot to a narrow opening makes it essential to have a look at where you are going. Use the trees at the back of the green to pick your line and as you will be playing from an uphill lie make sure you take an extra club to combat the slope. 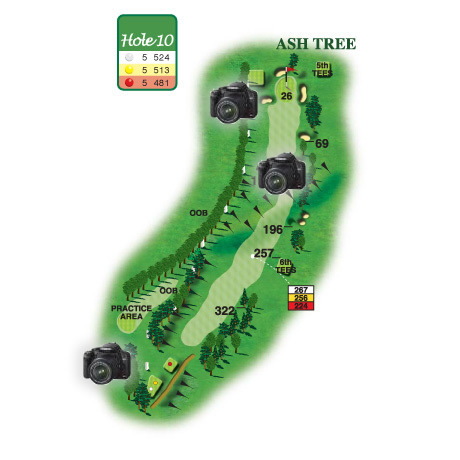 The thirteenth hole (previously the tenth up until 2020) is the only par 5 on the course. For the longer hitters the green is reachable in two, but for the majority it is a three or four shotter. Try and hit your tee shot down the left side as it will run to the right. When hitting over the hill, hit to the left of the marker pole as the ball runs down to the right and this will help avoid the bunkers on the right side of the fairway at the top of the hill….. 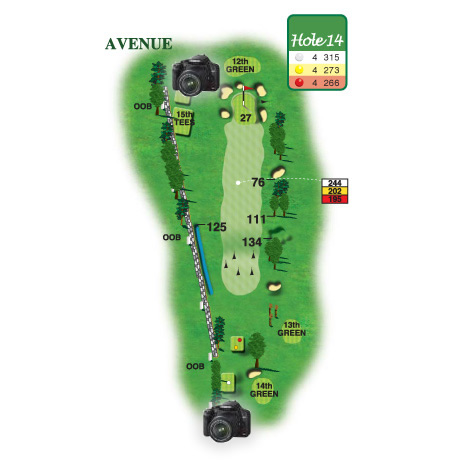 The fourteenth hole is another short par 4 and a good birdie chance. Try and keep your drive to the right side of the fairway as this will help you hit your second shot into the slope of the green. The second shot should be a reasonably short shot but tricky because the green slopes from left to right. Try and leave your ball below the hole. A running chip is a good way to play this shot, make sure you aim left to allow the contours to work. 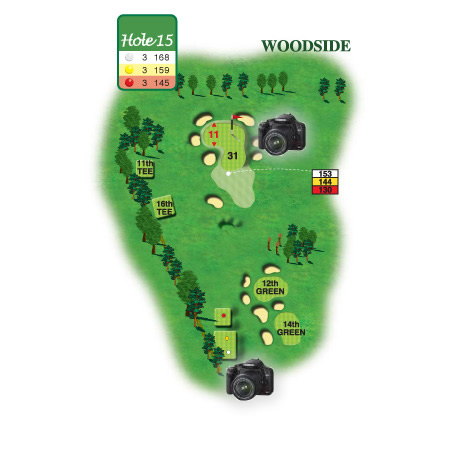 The fifteenth hole is another very demanding par 3. The green is well guarded both left and right, and is quite firm at the front of the green. A shot on the front left edge of the green is the ideal way to play this hole; the ball will kick down to the right into the centre of the green. Be careful with the wind, it generally plays slightly down wind from the left./p> 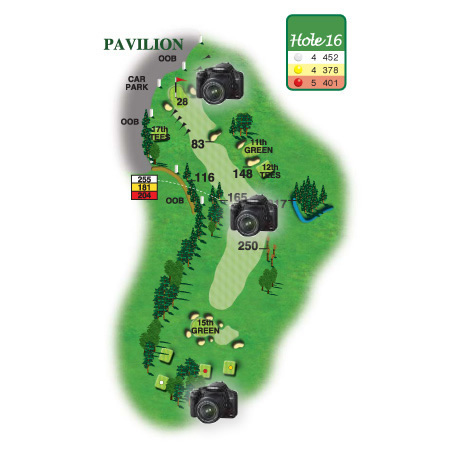 The sixteenth hole is the second hardest hole on the course. If you are playing from the medal tee then aim for the twelfth tee, this will give you a view of the green. If you are playing from the yellow tee then aim just to the right of the trees, or for the longer hitters you can go straight over the trees to leave a short shot into the green. The wind generally helps here as it is from right to left. The second shot is very deceiving; it generally plays a lot shorter than the yardage. The ideal shot is to land the ball short, front right, and let the slope take the ball down into the centre of the green. 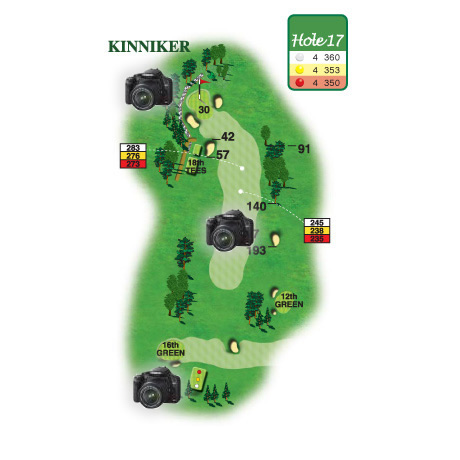 The seventeenth hole is a very testing par 4 as it generally plays into the wind. The ideal line is to the right of the marker pole; this will open up the green and take the left bunker out of play. Make sure you take plenty of club as the second shot is very deceiving, check the wind direction as it could be slightly right to left. 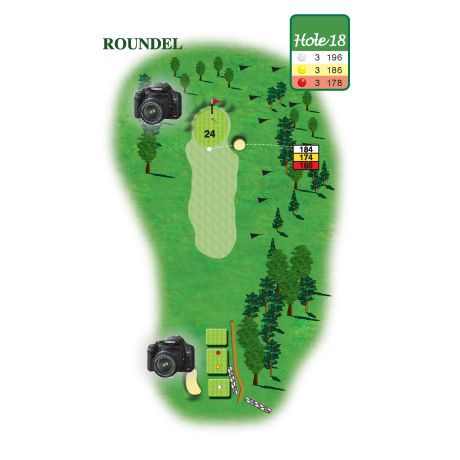